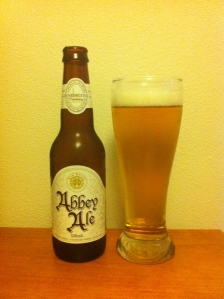 Abbey Ale is a traditional monastic ale, it is golden in colour, blessed with scents of fruit and spice, with a delicate champagne-like finish balanced with a hint of bitterness.

Firstly, I don’t know if I’ve ever had a traditional monastic ale before. At least not an ale that advertises to be monastic anyway. Secondly, urgh, pass me the bucket! Did you really just use the word ‘blessed’ in your description?! It’s a bit of an oversell and really pushes up expectations. Also, tasting notes are generally wanky enough; there’s no need to up the ante any more by employing adjectives synonymous with the almighty.

A quick look at the New Norcia Benedictine Community website and it appears the ale is brewed in Camperdown, NSW by Malt Shovel and then it’s shipped to New Norcia in Western Australia (apparently the only monastic town in Australia by the way) for “ageing in the cool cellars beneath the monastery at New Norcia.” At least sounds like they’ve gone to a bit of effort even if it is made by the brewers of the James Squire range.

First impressions aside, let’s get on with the tasting. It’s got a nice head but it disappears a bit too quickly for my liking. It’s a light golden, straw colour and impeccably clear.

There’s not a lot to smell but a yeasty champagne smell which is pretty overpowering. I could be wrong but I’m gathering from this that a second fermentation has occurred with the smell (and presumably a similar champagne-y taste) developing while being stored. There is a small hint of spice but it’s well hidden.

Taking a sip the first thing I notice is it’s fairly light on in the carbonation stakes, which is making me second-guess my fermentation assumption. It’s not alarmingly light on the carbonation though so it’s more a nice surprise than a let-down. Especially after my gassy exchanges drinking Hop Hog Feral White the other night but that’s another story.

The fruit and spice flavours are there but only slightly and are quickly overpowered by the ‘champagne-like finish’ the ale promises. Wow! It’s strong, very strong. So much so it tastes like I’m drinking a spirit my mates have mixed me during Saturday night predrinks: three parts spirit, two parts mixer. It’s also got quite a bit of body to it for a clear ale.

As to the hint of bitterness, it comes to the fore at the beginning but again it quickly dissipates with that powerful champagne-like kick.

Overall, it’s a surprising flavour and an interesting beer. It’s hard to compare to anything I’ve had before. At 7.0% though it packs quite a punch so take it easy. This is not a beer to stick with for your Sunday sesh.