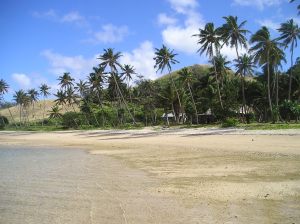 I did something a bit unusual this week: I worked in Fiji. Not on the blog – I wish we made any sort of income from writing about beer – but my day job, taking me from a comfortable, middle class existence in Brizneyland out to the middle of the South Pacific.

While this is not my first Fijian trip, it was certainly an eye opening experience. For me, it begged, and answered, a great number of questions about the state of the developing world.

Here in the first world, we take our infrastructure for granted. I figure the average citizen knows there’s a bunch of well-paid wonks who make sure the lights stay on, the water, sans cholera, flows and the roads actually go somewhere but no one really notices it until its not there.

Despite this, our infrastructure is a key platform on which the economy functions. Without the roads and railways, the bananas, iron ore and tourists go nowhere. Without electricity, the novelty rubber dog turd factory has to shut down. Without clean water, people get sick and can’t work.

The rub, however, is if you don’t have this infrastructure, how can you have a competitive economy and how can you build the infrastructure without an economic foundation? I suspect this conundrum defines the gap between the first and third world.

Fiji is an excellent example. Given Australia’s booming wealth, Fiji is the nation’s ninth state (New Zealand’s north and south islands being states 7 and 8). Scores of Australian tourists, I’ll use the term “bogan” for brevity, take the three or four hour flight from the east coast to Nadi each day. A small portion of the money the Chinese have pumped into our economy in exchange for our dirt is left behind in Fiji in the form of cocktails, room service and weddings.

And that is all they have. Proof is in listening to the radio: an additional shipment of papaya to Australia made the local news. Total value: $20,000. What kind of economy do you have when twenty grand makes the news?

A nation like Fiji is in desperate need of a diversified economy. The GDP per capita of Fiji is approximately one-tenth that of Australia. If you take a look at the business case for investment in Fiji, it’s not difficult to see why:

Okay, labour costs are low. Plenty of nations, China being the most prominent example, have built successful economies on low labour costs but Fiji won’t become the world’s factory if the power regularly goes out and the goods can’t get to someone who will pay for them.

Other than hospitality, it’s a difficult case to build for investment into this part of the world. I’m sure that the Fijian people know this but they simply cannot afford to build autobahns, freight airports and world class universities with the income they receive from tourism.

What about a bit of outside help? Neo-colonialism, anyone? Simply put, any white guys that go to Fiji are out to game the system for their benefit at the locals’ expense. There is no such thing as outside help.

The only solution is for the locals to savvy up. When a resort developer comes to town, they need to (discreetly) shake them down for all their worth. That includes building roads, water mains and power lines before a spade is turned on site and keeping a substantial portion of profits on-shore, whether through wages or taxes. Once Fijians are employed at the new resort, the government must make them pay their taxes to keep the maintenance up. Only once that basic infrastructure is built can the economy hope to grow and diversify.