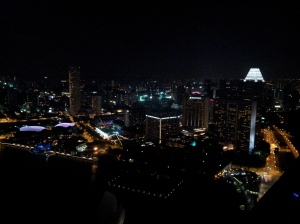 I arrived back from Singapore on Monday and it’s been a long time since a country managed to blow my expectations away so thoroughly. I kind of expected America when I went last year but not Singapore. This is doubly surprising due to my previous visit to south-east Asia’s island city-state in 2008.

On that occasion, I caught the overnight train down from Kuala Lumpur (first class, of course), spent the day in Singapore – including getting caught in a world class downpour – and returned to KL that night. Not being the same person I am today, I walked down Orchard Road and was amazed/appalled by the number of shopping centres, I wandered the Singapore Botanical Gardens and I paid a visit to the Asian Civilisations Museum. In 2013, things were a little different.

Shit, things have changed in five years. Gardens by the Bay opened in 2012 and is an awe-inspiring version of what botanical gardens should be. The two domes – one for rainforest and the other for flowers – are enormous, climate-controlled masterpieces of structural engineering and architecture. The Supertree Grove and it’s nighttime light show floored me for it’s flawless execution (coming from someone who knows a little about lighting design) and it’s stunning imagery.

The architecture, in general, shows that Singaporeans are not adverse to design risk and that despite the lack of land availability, are willing to sacrifice net lettable area to make a statement. The result is a contrasting and visually stimulating city to be in. The pace of construction and obvious disregard for conventional workplace health and safety adds another dimension.

Also, if you’re male, pay a visit to Orchard Tower’s famous “Four Floors of Whores“, as recommended by every single cab driver I had. Ipanema has a great band but I’d steer clear of the hookers.

I don’t like seafood as a general rule but when in Rome, etc, so I tried chilli crab (found it too fiddly), barbecued stingray (tasted like fish) and coconut prawn (not that exciting). I can see how some people would like this but it’s not for me. Noodles and rice, on the other hand, are amazing. My small sampling – in a mall food court, no less – kicks the crap over anything I’ve tried in Australia. I don’t remember trying much food last time I was in Singapore but I can see why people come just to try the food.

Well, this is a beer blog, no? If you read #39 APB Tiger Beer, I gave an overview. In short, drinking – especially at clubs – is an expensive business. Lucky for me, my trip was most expenses paid. Two of the highlights were rooftop bars: Ku De Ta at the top of Marina Bay Sands (casino is $100 entry for locals, free for foreigners) and 1-Altitude at the top of 1 Raffles Place. Indonesia and Malaysia can be seen from the rooftop of the latter and, on some days, your mobile will pick up reception from Indonesia. Stunning views on both and highly recommended, even if you only stay for one $20 drink of basic spirits. There are craft beer options (e.g. Pump Room and Highlander at Clarke Quay, which reminds me a lot of Sydney’s Darling Harbour) but nothing worth the prices charged. Stick to Tiger Beer.

(As a side note, Beer & Brewer, an Australian magazine, talked about Singapore in their winter issue. Sort of. I mean they mentioned beer and some standard travel guide stuff. Believe me, this is a much better wrap-up. Did they talk about hookers? Nope)

It might be impolite to describe Singapore as a nepotist dictatorship but that’s what it is. However undemocratic, Singapore’s regime is at least benevolent and, particularly when it comes to racial tolerance, more liberal than many western states. Of course, the flipside is the death penalty for drug trafficking, the ban on chewing gum and you can legally have sex as a lesbian but not as a gay man. I can live without those three things but I can see how some wouldn’t.

The takeaway lesson from Singapore’s transformation is that if you want a flexible, open, first world economy, your leadership needs (take note, Fiji):

A perfect example is the Marina Reservoir. Singapore imports a fair chunk of it’s water from Malaysia, which is an appreciable risk should relations break down. To offset this, the government built a dam and after two years, what was salt water became a source of drinking water, enough to provide 10% of their total needs or one-third of what they get from Malaysia. To recap: Singapore built an enormous dam in two years because it was prudent and showed some foresight. Compare that to any infrastructure project in Australia of the last twenty years.

Singapore is a vibrant, interesting and exciting place to be as a tourist. If you’re interested in civil and political rights – as say, a citizen – this is not the place for you.