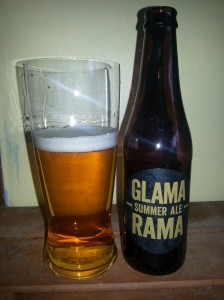 I first tried some of the Sydney Brewery’s creations at the Canberra Craft Beer and Cider Festival in April of this year, and I remember being quietly impressed. Nothing to rave to every man and his dog about but some pretty crisp, clean flavours and nicely refreshing beers.

So on my recent trip to Plonk I decided to give their Summer Ale a fair shake of the sauce bottle (that’s the saturation of election coverage talking). The website describes it as:

“Crisp and clean, light and refreshing, like the way you like your waves. And as for that cheeky little touch of tropical fruit and pineapple you detect every time you take a sip?
That’s nature’s way of telling you it’s going to be a long hot summer.
But just stay cool and reach for another.”

The colour is a vibrant gold and enticing in it’s crisp, clear appearance. A great colour for a Summer ale. There’s a decent head off a rough pour that disappears all too quickly. Yet despite this lack of frothy head there appears to be plenty of carbonation coming off the glassware.

And as for that cheeky little touch of tropical fruit and pineapple in the aroma? It’s non-existent unless you know what canning time at the Golden Circle factory in Banyo smells like. If you haven’t experienced this confrontation of the senses then it’s unlikely you’re going to get the slightest hint of pineapple. Let me explain – it’s not really pineapple at all just some distant and disfigured relative that’s done too much manual labour for its own good and has started taking on the smell of the machinery it works with.

To taste it’s most certainly crisp and light but the flavour is a little off. To start with it tastes a lot more like a lager to me than an ale and a bad lager at that. It’s kind of like a high end XXXX that has been watered down with a bit of bad-tasting pineapple juice. Even if it had any depth of flavour it’d only be adding to the misery of this mess. I hate to say it but it’s beers like this that give the craft beer movement a bad name.

I’m honestly questioning why they would’ve released this commercially. Didn’t they test it with consumers first?! I can only hope and cross my fingers and toes that it tastes much better on tap. I’m disappointed Sydney Brewery, very disappointed, and I ended up pouring it down the sink.