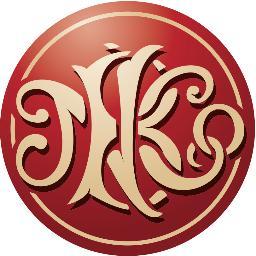 Newstead Brewing Co is the south-east’s newest brewery with the grand opening was just over a month ago on December 7.

Located on Doggett Street in Newstead, NBCo can call Tippler’s Tap and Green Beacon Brewery their neighbours, making Newstead the ideal place to kick off SEQBeers.

NBCo offers twelve taps, with a selection of eight beers brewed just metres from the bar and piped directly into the tap and four guest beers from other small-scale Australian breweries.

Jason from brewsandbacon.com spoke to Mark Howes from Newstead Brewing Co in December before they opened about their backstory and philsophy:

During the dismal abyss that some people call academic research my wife decided that I needed a hobby to improve my work/life balance and to have a bit of fun so she bought me a home-brew kit from Brewers Choice. When I realised that brewing beer is just as sciencey as science with much better outcomes I was hooked. Every year I would add bits and pieces to my kit until it got to the stage where I was kicked out of the kitchen and into the garage with an all-grain two-vessel 0.2hL brewhouse…

Looking for some investments and tired of my whinging about the vagaries of research [Mark’s parents] began toying with the idea of opening a craft beer bar. Talking to a good friend and restauranteur, Michael Conrad, at the same time, who was also interested in trying something new, the plan started to take some shape. After thinking about it for a while, Michael figured it would work better as a fully fledged microbrewery, bar and restaurant. About this time I was half way through the Grad Dip of Brewing course offered at the University of Ballarat and was getting more and more passionate about brewing. Since then we have adhered strictly to the Newstead Brewing ethos, which is pretty much “the best decisions are made post hoc”.

ammo and I paid a visit a bit over a week after opening and it was clear that there were a few bugs still to be worked out on the service side, with a number of staff tripping over each other to serve customers (if that’s your only problem, you’re doing well). However, the fit-out looks fantastic, the menu is delicious if the steaks are anything to go by and the beer is fresh and tasty.

On the night, I sampled three of the beers with a view to doing this series: 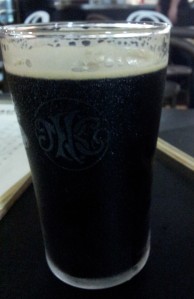 Unfortunately, being a porter, 21’7″ lacks a generally refreshing nature. While a bit thinner than I prefer porters, 21’7″ is still a delectable beer which can be consumed in a quantity greater than you would expect. It looks and smells as one would expect – dark black in colour, roasted notes on the nose, tan head – and tastes like all good porters should, with masses of dark maltiness and pleasing burnt bitterness.

The name is a reference to the 1974 Brisbane floods. Combining the floods with a porter – whether intentional or not – is a masterstroke, as the porter’s colour and consistency evokes the memory of floodwaters (for better or worse in something you’re about to put in your body). 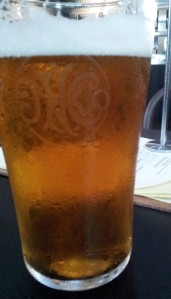 Out and a Bout Pale Ale

Out and a Bout Pale Ale is a fresh, Australian pale ale which is mostly refreshing to start with, followed by a honey malt and background fruitiness typical of the style. Overall, quite pleasant but not awe-inspiring.

The name is a reference to a time when Newstead was a bit rougher, leading to “bitter, little stoush[es]”. Today, Newstead is one of the most affluent areas of Brisbane, having undergone substantial re-development since the turn of the century, but was home to industrial and shipping areas from the 1920s onwards. While I’m not sure if Newstead was ever rougher than anywhere else in Brisbane, it would follow given it’s heritage. 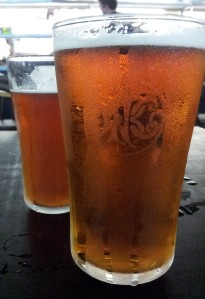 Two to the Valley Pale Ale

Two to the Valley IPA has a strong cut grass aroma – like a freshly mowed lawn on a summer’s afternoon – but lacks a strong bitterness associated with IPA. It feels and drinks more like a big American pale ale, with a strong overtones of fruits and greenery. Overall appearance is par for the American IPA course.

I must admit to not really understanding the backstory for the name of this beer. I think it’s a tangential reference to the 1942 Battle of Brisbane when Australian and US soldiers rioted for two nights over the usual stuff that soldiers riot over (pay, women). The tap decal pictures two military policemen and suggests “here’s to old allies”.

I’m sure this won’t be the last time Newstead Brewing Co rate a mention on this blog, especially once growlers are available early this year.