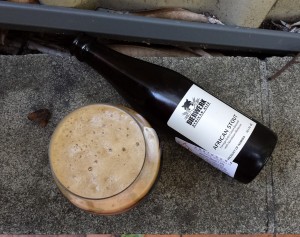 We don’t shy away from beers originating in the places you’d least expect. There was the Lebanese Pale Ale, a lager from Fiji and a barleywine from Norway, which I was regrettably harsh towards in retrospect (untrained palate, what are you going to do?). So when I saw a label with ‘Product of Namibia’ at the Wine Emporium, how could I say no?

Unfortunately, we don’t get much traffic from Africa. I do know that Guinness is very popular in Nigeria, home to the first Guinness brewery outside of Ireland despite the fact that it’s illegal to brew beer there. I also know that Namibia is a long way from Nigeria, so I’m not sure how relevant that is. For the record, it’s this far:

Much to my shame I now realise that I was confusing Namibia, a large country on the west coast of Africa with Botswana and Botswana with Swaziland. Now that I’ve thoroughly offended a whole continent of people, let’s see what the Bierwerk African Stout has to offer.

Refreshingly, there’s no tasting notes on the label to tell me what to expect, other than its a “Foreign Extra Stout brewed with Namibian Molasses”. The label states that it was brewed and bottled by Camelthorn Brewing Company, which has its own range of beers, so I don’t know if that means it was contract brewed or there’s been a change of management at Camelthorn.

But in a particularly extreme example of the route some beers take to get to the Drunken Speculation offices, this was brewed in Windhoek, the capital of Namibia, shipped to Belchertown in the USA, then (one hopes) to Melbourne and finally up to Brisbane. Assuming it was air freighted and there were no intermediate stops, that’s a trip of around 30,000km. That’s a bit less than here to Rome and back, which does not make for a small carbon footprint.

Greenhouse gases aside, the African Stout has an understated aroma. There’s little hints of black grain but not much of the strong coffee or chocolate notes one would expect. However, it corresponds quite well with the Guinness, as we experienced during Breakfast Beer Week. 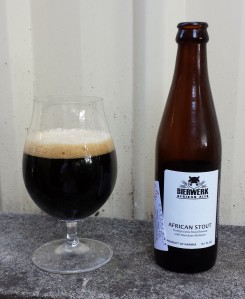 Despite the long journey, the beer is still in good shape and shows good carbonation with a tan head. The latter indicating that the malt bill had a generous serving of dark grains. The head retention was not superb but I also forgot to rinse the glass. My bad. Held up to the light, the beer is a matte, opaque black with some yeasty sediment floating through.

On taking a sip, my tongue is greeted with sticky, sweetness for the most part, in a stark contrast to the oily and viscous nature of many imperial beers. The reference to Namibian molasses has the image of the black tar-like substance rolling through my head, although its debatable what, if any, characteristics that the molasses has imparted.

Moving through the first impression, there’s a medium, sharp, spicy bitterness, with a lingering aftertaste of licorice. I’m not sure if the former comes from hop or yeast character or if both are imparted from the molasses but it adds a level of distinction to this beer.

Two things may disappoint about this beer. One is the relatively low ABV for an imperial stout at 7.2%. That’s right up my alley but others will want to see double digits for this genre. The other is that other than the sharp bitterness, there’s no wow factor. If you were expecting that the beer’s excitement would be commensurate with the journey its taken to get here, then you’ll find it wanting.

However, there’s nothing wrong with this beer, other than the floating sediment which didn’t seem to do any harm. I might even consider buying it again one day, should the opportunity arise, the price tag is not ridiculous (this 10oz bottle was around the $9-$10 mark for takeaway) and I can buy some carbon credits to offset its journey.