In a piece remarkably similar to actual journalism (well, profiling), we’ve already told the Beard & Brau story. I won’t reiterate their narrative in full for SEQBeers but I will give you the tl;dr

So if you couldn’t be bothered reading my masterclass in journalism, you’re all caught up. I don’t think we said it at the time, but I’d like to thank Chris and Tanya for their time on the day.

On to the beers!

Let’s get it out of the way that the doggy theme, while cute, is not very SEQ-y.

Now, Red Tail is an amber ale fermented with a Scotch ale yeast. It smells a touch soapy and a touch burnt with no hop aroma to speak of. It’s a dark red colour and opaque but surprisingly, I don’t think the flavour’s particularly malty, although that could be my jaded palate speaking for itself. There’s a touch of Scotch character from the yeast which stands out in the clean, dry, mildly bitter beer.

Not a mind-blowing flavour profile but enjoyable; something in the Fancy Pants mould. It might be more refreshing out of a can too?

Depending on what you believe, Golden Paw is either an ale or a lager. As the bottle copy tells us “Golden Paw is a[n]…American style Pale Ale fermented with lager yeast.” That’s not a mistake but actually in the style of the Anchor Steam Beer, sometimes called California common.

This is my second crack at Golden Paw. I’ve had it straight from the bottle at the brewery, where I got a whack of caramelly Anchor Steam but fresher and more intriguing. The second is what you see in the tumbler glass, which I’m starting to think actually highlights flaws rather than emphasising their strengths. The head retention is good with a solid degree of carbonation. Golden Paw offers a piney, resinous aroma with a suitably dark golden colour. On the taste, it is a clean and dry beer with a mild bitter aftertaste.

As a well-crafted lager, it gets a big thumbs up from this guy but it’s also perhaps too light on the hops to be considered an American pale ale. Or maybe Golden Paw should be served in an IPA glass. 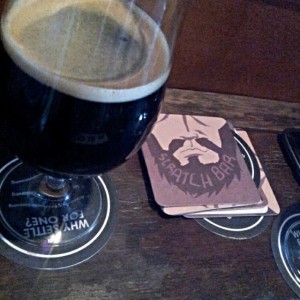 Traditionally, SEQBeers looks at three beers per brewery. At the start of the year, seeing a Beard and Brau beer around town (excepting the Bearded Dragon but that’s not really “town”) was pretty rare. Distribution has been improving, particularly in the last few weeks, with the two bottles above available at Craft Red Hill, Double Red Tail bottles at The Wine Emporium and Black Snout milk stout popping up on various taps.

Irrespective of the third beer I would have included (I was briefly tempted to bullshit my way through Black Snout, having had it twice sans note-taking, but that wouldn’t be fair, even though I prefer the other three I’ve tried to the above), the Beard & Brau range is not well suited to this particular exercise. We could fix that with a blogger-brewer collab. I’m thinking Boris’ Brisbane Belgian Blonde*.

Anyway, there’s six beers to choose from and of the five I’ve had, they’re clean, well-made, on-style – more or less – and lacking the zaniness of some of our other local breweries. Beard & Brau’s future plans (e.g. barley grown on site) will add another dimension to the local scene; agrarian Zen-like beers are not something anyone else offers.