Dollar signs started flashing in front of my eyes. Mead: a sweet, highly alcoholic, obscure beverage. Potential for massive growth. An easy to tap history for marketing. Only a handful of small producers in Australia. It seemed like selling smack wouldn’t be able to bring in as much cash as a meadery.

The obstacles to getting a drug kingpin level of walking around money were somewhere in the back of my head. I can’t make beer very well and I didn’t know anything about mead other than “something something honey”. I don’t have any cash lying around for a startup venture of my own. I have no aptitude for sales.

Somehow, those enormous hurdles didn’t stop me from being borderline obsessive in putting down my first mead.

Despite what I thought before I looked into it, mead is more closely related to cider or wine than beer – there’s no brewing involved in mead making (or mazing). Mead is a fermented beverage whose ABV can be anywhere from 5% up to the low 20s, depending on the style. The fermentable is predominantly honey, although there are plenty of variations on that theme involving fruit, malt, herbs and spices. Add water and yeast to your flavoursome fermentables and you’re away. Meads can be still or carbonated, sweet or dry and just about any colour of the rainbow.

Depending on who you ask, mead’s been around for anywhere between five and ten thousand years and the varieties have cool names that reach back into the deepest depths of Indo-European languages: braggot, metheglin, cyser, melomel. I, however, only found out about it when a bunch of bloggers got together to re-try our Bacchus Bloggers Series Beers at the Scratch earlier this year.

It was $15 for a small glass of Moonlight Meadery’s finest. That price is steep but yolo, right? I can’t remember exactly which variety it was ( It was actually Desire, thanks Jason) but it was like the best red wine you’ve ever had and then some. There was an incredible depth of flavour, rich, full body and a unique character. On another visit, I recommended it to a friend’s girlfriend who lapped it up. I figured this stuff must sell to people who don’t like beer but it would later turn out she was being polite. Too late: the dollar signs had started rolling.

I’ve now made six different meads. The first two were not temperature controlled (let’s be polite and call it a “forced attenuation test”) and used the same must (the wine/mead equivalent of a wort) to see what the yeast would do. I put together a batch with Safale S-05 American ale yeast and one with Vintner’s Harvest BV-07 white wine yeast. A generous five months of ageing later and this is what resulted:

Look at it! How’s that for a beautiful looking first-attempt mead? What a shame it tastes like paint thinner. If anyone’s ever made anything with Turboyeast in Australia, you might be familiar with the smell of nail polish remover in your alcohol. It’s been bottled for five months and while the varnish character is reducing, I did note that this was “extremely disgusting” and there was an aftertaste reminiscent of butyric acid – my favourite off flavour.

For the record, this was the US-05 batch and when I bottled it, I figured it ticked all the boxes except for the acetone thing, so if I controlled the temperature, this would be the way to go. 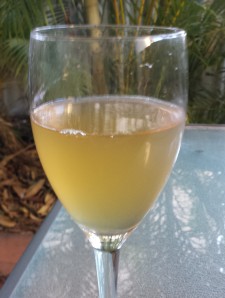 The BV-07 batch came out a bit cloudier. I didn’t realise this at the time but wine yeast needs a lot more time to flocculate. Multiple rackings over many months. I don’t really have that much patience so it pretty much just taste like yeast. It’s brow-furrowingly astringent, has a massive yeast bite and feels like a thin wine. Not a drinkable result.

Taking what I learnt from the first run, and piling on additional research (it seems no one has written a book about mead in the last fifty years), I made four separate batches simultaneously using supermarket water containers as fermentors, which offered the advantage of having a tap. 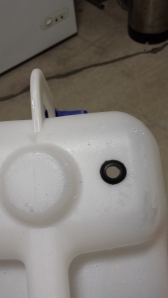 Preparing the four fermentors and getting the must into them – I had to spoon 1.5kg of defrosted berries into one – took a full five hours. I pitched the yeast the next night and three of the batches really took a while to get going. I’m not sure if re-hydrating the US-05 made the yeast extra frisky, if it was just a bit too chilly in early August, if there was heaps of oxygen available or if the initial pH of less than 3 was a bit too acidic for the yeasties. I do know that the honey didn’t dissolve properly until well into the fermentation which means that almost none of my original gravity readings were of any use.

Mystery ABV aside, after a month fermenting and then another sitting in bottles, here’s the results: 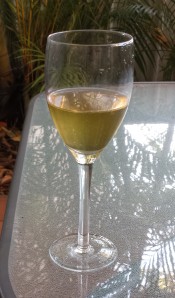 This was the control, i.e. a straight, dry mead, and it looks identical to the original batch. However, this batch doesn’t have the same faults or, at least, they’re not as excessive. I got a slightly fruity nose, a touch of tang and alcohol burn, a dry finish and an overall impression of drinking a particularly flavourless white wine.

Considering this was fermented with US-05 but is not carbonated and the fermentables are 50-50 honey and dark malt extract, I don’t know whether this qualifies as a mead (a braggot, specifically) or a beer. It is strong with an OG of  1110 which the yeast managed to bring down to a more palatable 1024 at the time of bottling.

Correction: the approximate ABV was somewhere in the 11% ballpark. Despite this being  somewhat above the nameplate alcohol tolerance for US-05, this batch fermented the most smoothly. It has a pretty imperial stout-like character and although the overall flavour profile is lacking, the booze is relatively well hidden and it could do with a dose of hoppy bitterness to offset the sweetness. It’s a bit astringent, has a few esters going for it and I think lots of potential for ageing. 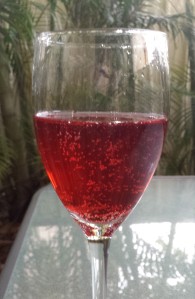 The mixed berry melomel, which included raspberries, dark berries and strawberries, came out like a particularly dry alcopop. Interestingly, I got a good whiff of sulphur when I opened the bottle. It seems to be the only one with noticeable carbonation – for whatever reason – and smells like real berries but tastes little of them. Disappointingly the candy imitation flavour that you find in the likes of Framboise was absent. This one is probably the most drinkable of the lot, not least because it’s also the prettiest. 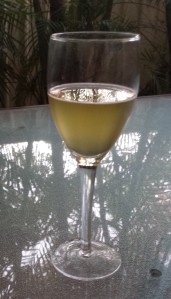 The grapefruit melomel was described in one of the mead making books I picked up as an “exquisite appertif”. I took it one step further and mixed honey, grapefruit juice, bitter lemon and lime cordials together to see if I could pull off a balanced citrus melomel. In the end, I got an odd, spicy aroma mixed in with some sulphur, finishing in a medicinal, tangy mead with an overtone of bitter grapefruit pith. An unusual specimen. Whether the yeast went a bit nuts or another organism got in, I don’t know, but some time will show it’s true qualities and hopefully take care of that sulphur.

The first run through came out undrinkable and it may be years, if ever, those meads become palatable. The second run through was widely lacking in flavour so while US-05 does everything right, if you’re looking for a bold, characterful mead, wine yeast is required, which is a shame because I’ve spent a lot of time getting to know US-05 and I don’t know if I can bring myself to learn the habits and peculiarities of the swathe of wine yeasts that are recommended for different types of mead. There are specific mead yeasts but I’m not sure if they’re available locally.

I guess I’ll bury my mead baron dreams for now.